Running MicroPython on Mimas A7 using LiteX and Migen

MicroPython is an implementation of the Python 3 programming language and targeted towards running on embedded development boards. FPGAs are well known for their flexibility and versatility so we can also run MicroPython firmware on a Soft-CPU implemented on FPGAs. In this article, we will use Litex & Migen frameworks to build the gateware (bitstream) for the FPGA and the MicroPython firmware for the soft-CPU running on FPGA. The TimVideos projects have come up with the LiteX Build Environment for easily building LiteX and Migen based FPGA designs. This article takes you through the steps to build the gateware and MicroPython firmware and to run MicroPython on the Mimas Artix7 FPGA Development board using the LiteX Build Environment.

Download and extract the TimVideos LiteX Build Environment from here to a suitable location in your system. Change to the”litex-buildenv” directory (using cd). For this article, the author downloaded litex-buildenv inside the “LiteX_Build_Environment” directory. Modify the below command as appropriate in your case.

Run “download-env.sh” script file inside “scripts” directory which will download the dependency packages required by the “litex-buildenv“.

The Litex Build Environment comes with Mimas A7 platform support. The ‘lm32’ and ‘base’ are the default soft CPU and target (SoC configuration) respectively. Litex-buildenv also supports other soft CPUs such as Vexriscv and Picorv32. Run the following command to enter the litex-buildenv environment with the previously set variables: 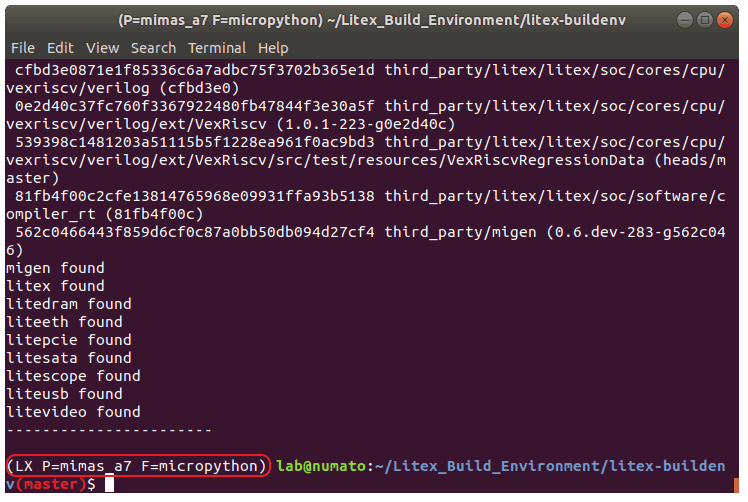 After entering the litex-buildenv environment, we can now build the gateware for build targets. To start the gateware build process, run: 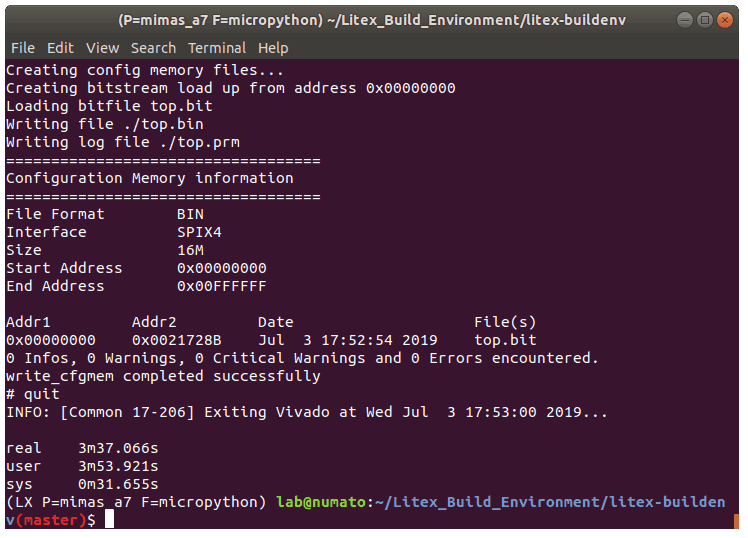 The generated bitstream and related gateware files can be found in the directory: build/mimas_a7_micropython_lm32/gateware/

Step 5: Load the Gateware and MicroPython to the Mimas A7

Once the gateware and firmware have been generated, the next step is to load the generated gateware and firmware to the Mimas A7 board. Connect the Mimas A7 board to the host system using a USB 2.0 Type-B cable. Open a new terminal window (keeping the existing terminal shell as it is, it will be used later) and enter into the litex-buildenv environment exactly as described in Step 2. Next, enter the following command in this new terminal: 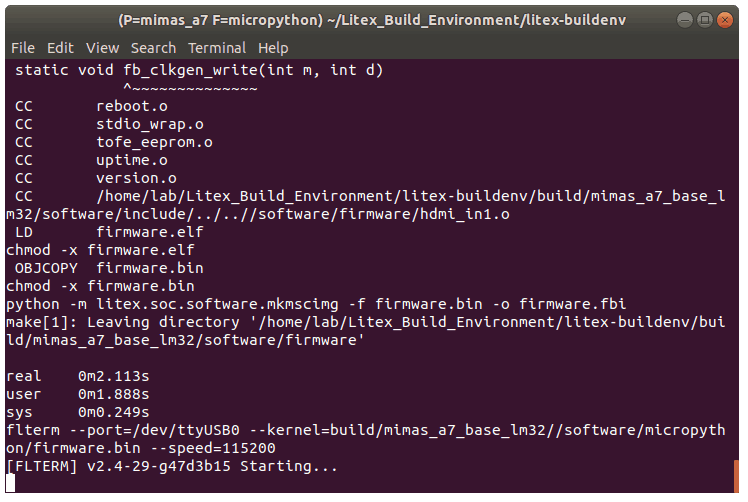 The Done LED on the Mimas A7 board should glow on for a moment and then go off after running the above command. This indicates that the gateware was successfully loaded to the FPGA on-board Mimas A7. 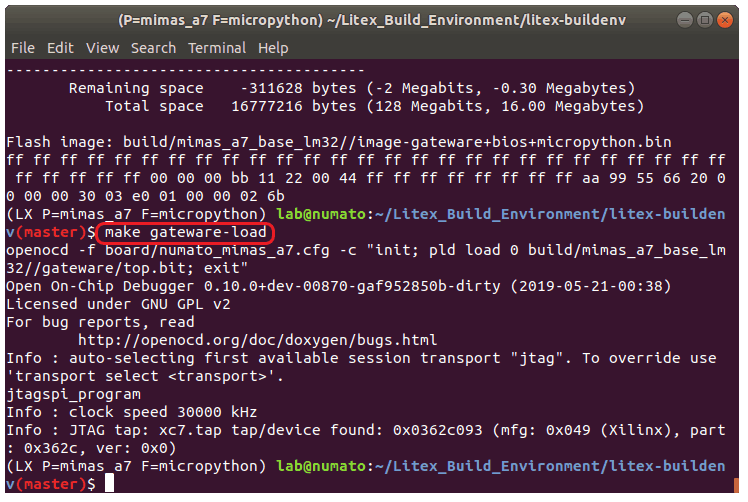 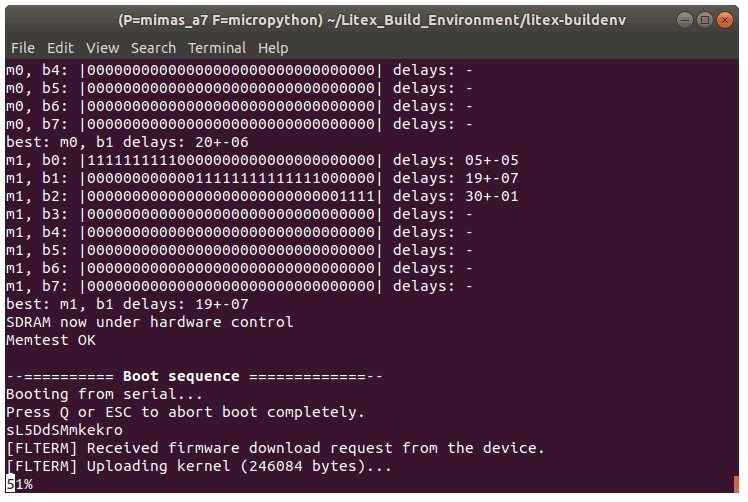 MicroPython should start executing as soon as uploading finishes and the MicroPython console should come up as shown in the image below. 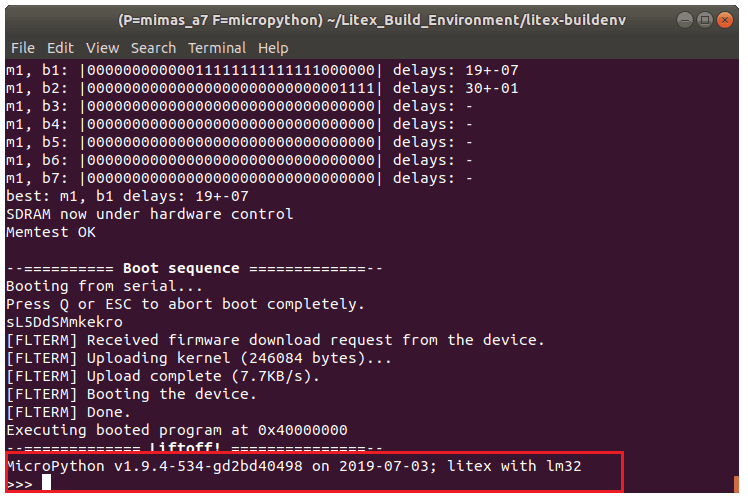 The MicroPython console can now be used to run any compatible Python3-like code. Standard Python constructs, features, and modules are available to the users. Refer to the MicroPython documentation for complete details. 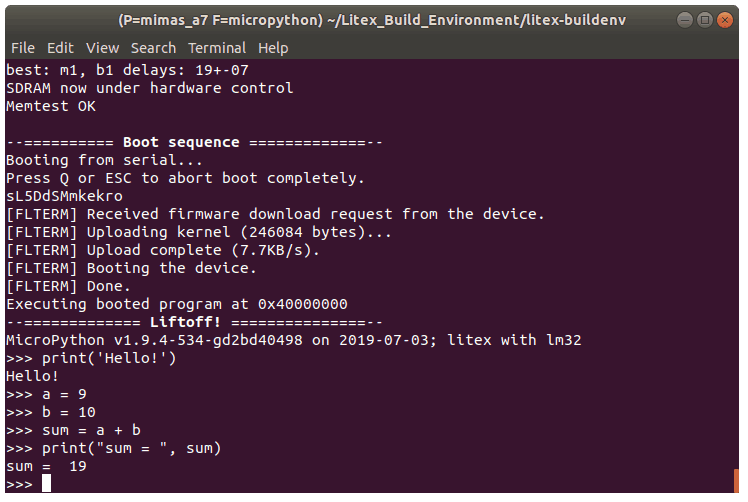 Congratulations, you’ve successfully run MicroPython on the Mimas A7 board using the LiteX Build Environment!