Running Zephyr RTOS on Mimas A7 using LiteX and RISC-V

The Zephyr RTOS is a secure and scalable Real-Time Operating System from the Linux Foundation for IoT embedded devices. It supports multiple architectures such as ARM, Intel x86, NIOS II, RISC-V, etc. The Zephyr RTOS is modular and useful for low-powered, small memory footprint devices and can easily run on FPGAs as well since FPGAs are well known for their flexibility and versatility. Zephyr comes with in-built support for LiteX built SoCs with VexRiscv CPU. The workflow is highly automated with the help of the LiteX Build Environment project from TimVideos which can build the LiteX SoC gateware with Vexriscv CPU, load it on to the FPGA as well as build the Zephyr firmware using just a few commands. This article will walk you through the steps to build Zephyr RTOS firmware and run the firmware on the Mimas A7 FPGA Development board using the LiteX Build Environment.

Download the TimVideos LiteX Build Environment from here to a suitable location in your system. In the terminal, change to the litex-buildenv directory using the cd command.

The Litex Build Environment comes with Mimas A7 platform support. We are going to deploy LiteX SoC with the VexRiscv CPU on Mimas A7, so choose CPU as “vexriscv” and CPU variant as “full” to enable all features of the CPU. The litex-buildenv supports many different firmware options such as bare-metal, Linux, MicroPython, Zephyr, etc. For this article, we select FIRMWARE=zephyr. 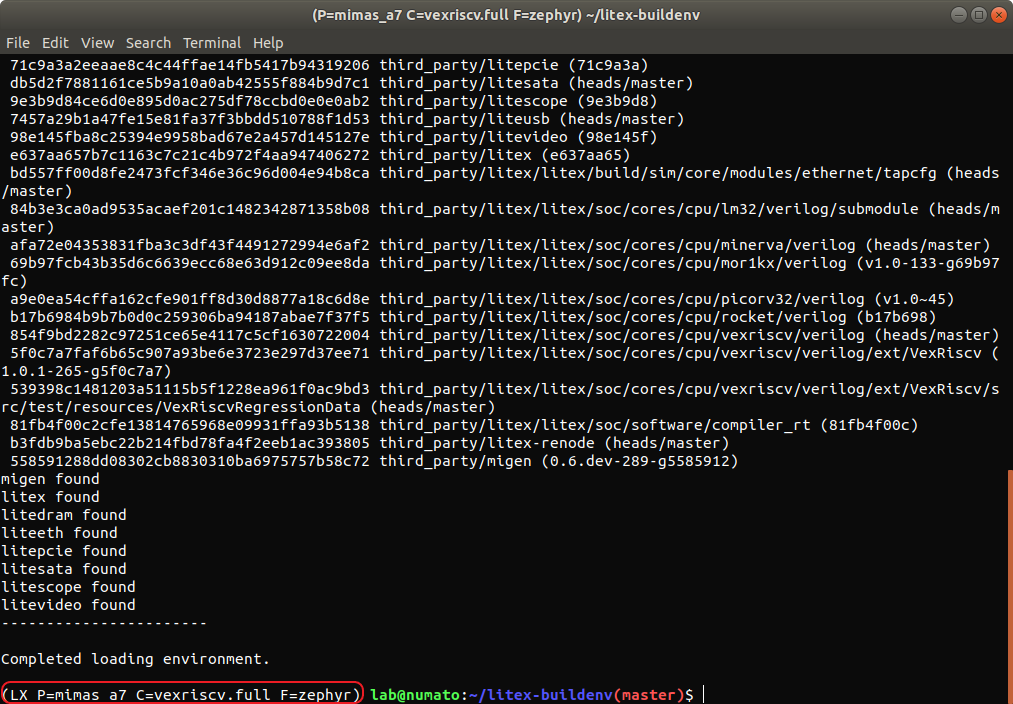 After entering the litex-buildenv environment, we can now build the gateware for the Mimas A7. To start the gateware build process, run: 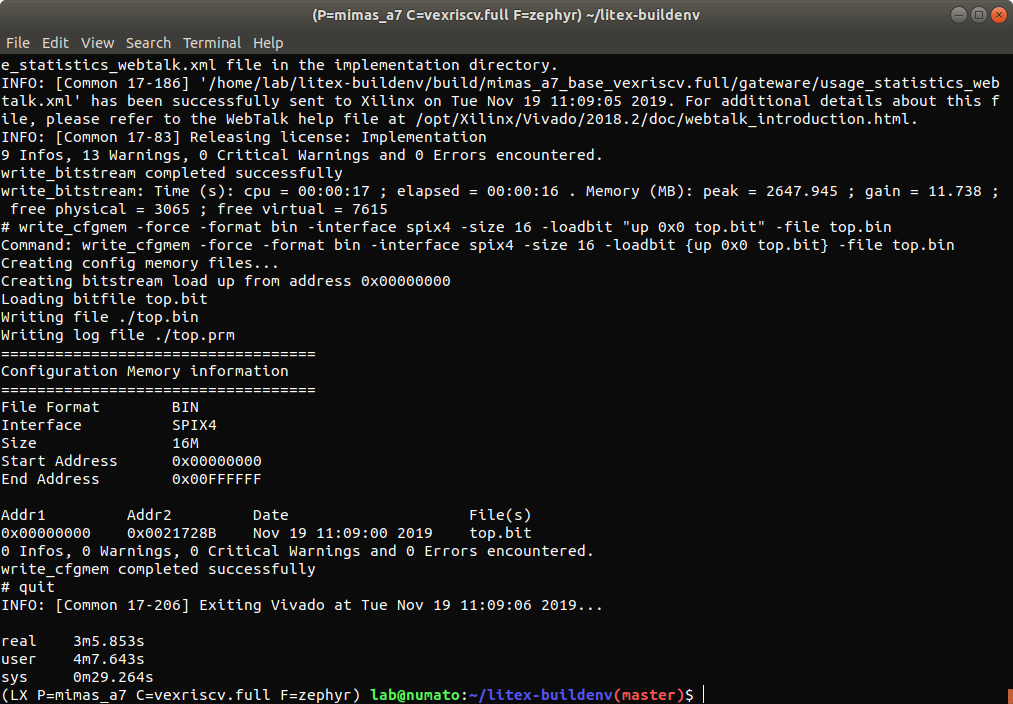 The generated bitstream and related gateware files can be found in the directory:  build/mimas_a7_base_vexriscv.full/gateware/

By default, this command builds the Zephyr shell application, similar to a Linux shell. The compiled firmware can be found in the directory: build/mimas_a7_base_vexriscv.full/software/zephyr. It is also possible to build other applications of your choice by setting the ZEPHYR_APP environment variable. An example is shown below for the hello world application. Don’t forget to clean up the build directory before going on to build another application.

Step 5: Loading the Gateware and Zephyr RTOS onto the Mimas A7

Once the gateware and firmware have been generated, the next step is to load the generated gateware and firmware to the Mimas A7 board. Connect the Mimas A7 board to the host system using a USB 2.0 Type-B cable. Open a new terminal window (keeping the existing terminal shell as it is, it will be used later) and enter into the litex-buildenv environment exactly as described in Step 2. Next, enter the following command in this new terminal to load the Zephyr firmware. 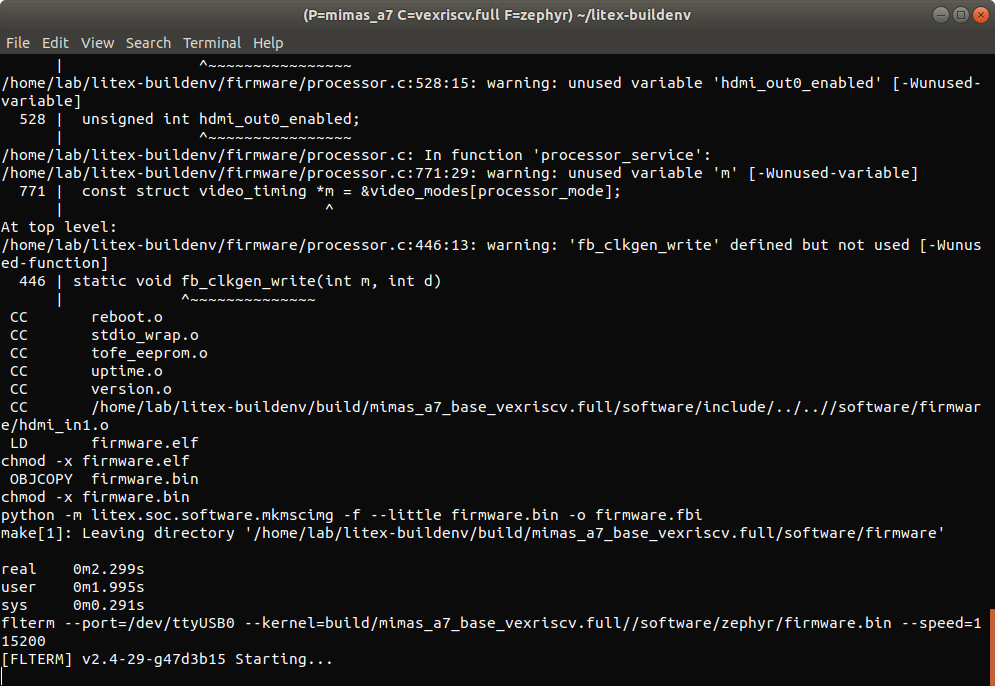 The Done LED on the Mimas A7 board should glow on for a moment and then go off after running the above command. This indicates that the gateware was successfully loaded to the FPGA on-board Mimas A7.

After loading the gateware into the FPGA on Mimas A7, the second terminal should start uploading the Zephyr RTOS firmware to the Vexriscv soft CPU running on the Mimas A7. The image below shows the RTOS Zephyr firmware loading on to soft CPU. 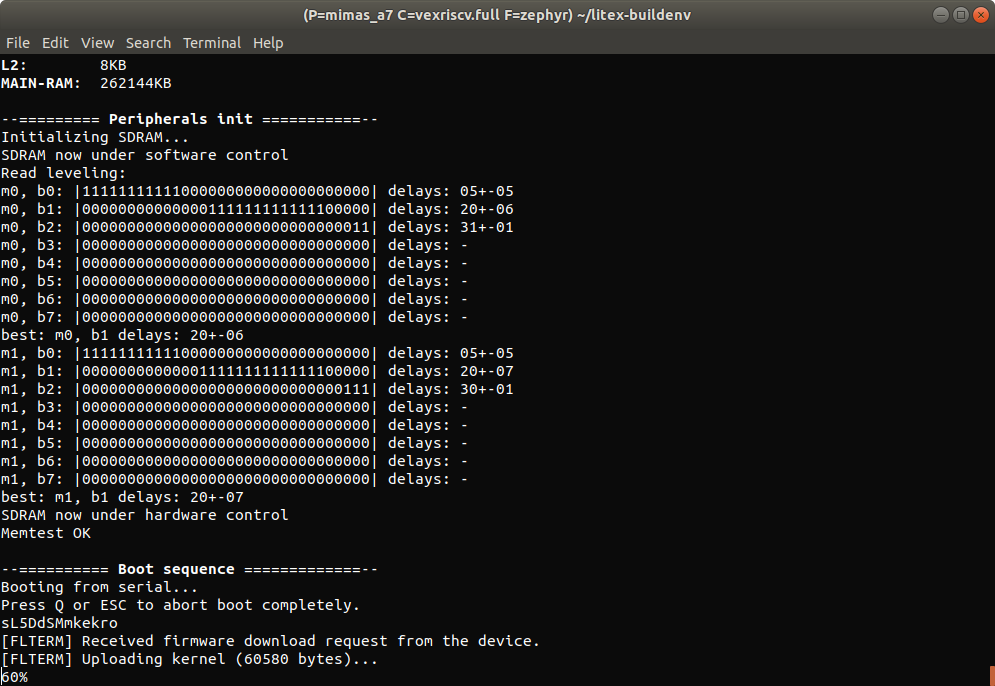 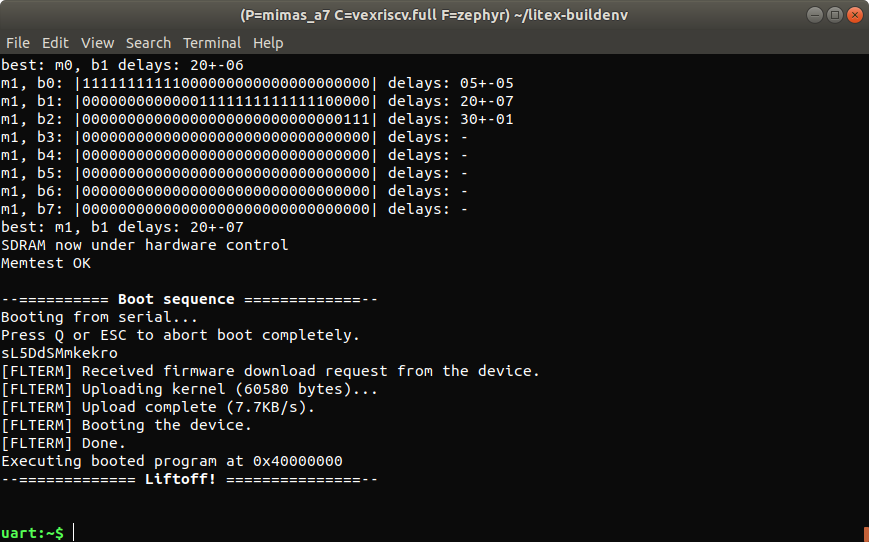 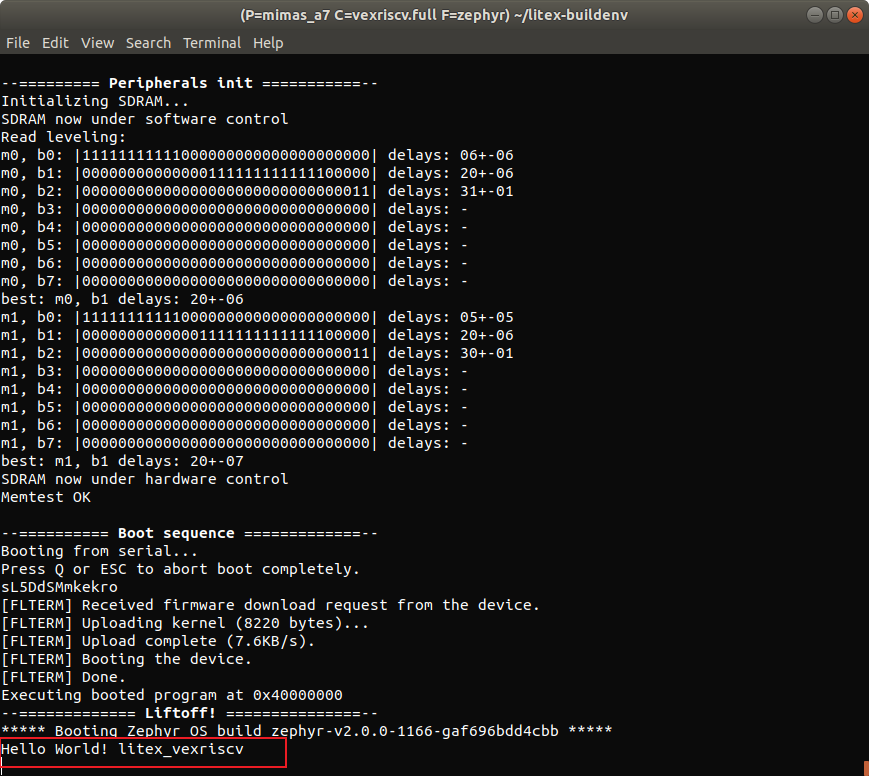 Congratulations on getting the Zephyr OS running successfully on the Vexriscv RISC-V CPU built with LiteX on your Mimas A7 FPGA Development Board!