MicroPython is a reimplementation of Python 3 programming language and optimized to run on microcontroller hardware and in a constrained environment. In this article, we will run MicroPython Firmware on an FPGA (Narvi Spartan 7 FPGA Module) board which is loaded with gateware containing a soft CPU. To create the gateware and firmware, we will use LiteX Build Environment by TimVideos. To know more about LiteX Build Environment, please visit LiteX and Migen.

All the steps are to be executed in a Linux system. Open Linux Terminal and follow the steps to create hardware/gateware, MicroPython firmware and to run them on Narvi. Screenshots are added wherever possible to help the reader to follow the steps.

Install the Narvi Spartan 7 FPGA Module drivers in your Linux system by following the steps mentioned in Narvi User Manual.

Download TimVideos LiteX Build Environment from here to a convenient location in the Linux system. In the terminal, change directory to the litex-buildenv repository by executing (For example, if it is downloaded in the home directory) the command:

To install the dependency packages for the built environment, run download-env.sh script file by executing the command:

We will use OpenOCD to program Narvi Spartan 7 FPGA Module. So, download its configuration file “numato_narvi.cfg” from here and save it in litex-buildenv/build/conda/share/openocd/scripts/board/ directory.

Before running any of the build steps, we must first enter the development environment. This step should be done whenever we open a new terminal window.

First set up the build targets by executing the following command:

Set up the environment for the above build targets by executing the following command:

If the environment is set up correctly, then the terminal should show something like "(LX P=narvi F=micropython) #" similar to the image below.

Once we have entered the environment, we can build the gateware by executing the command:

On successful completion of building the gateware, the terminal will give an output similar to the following image. 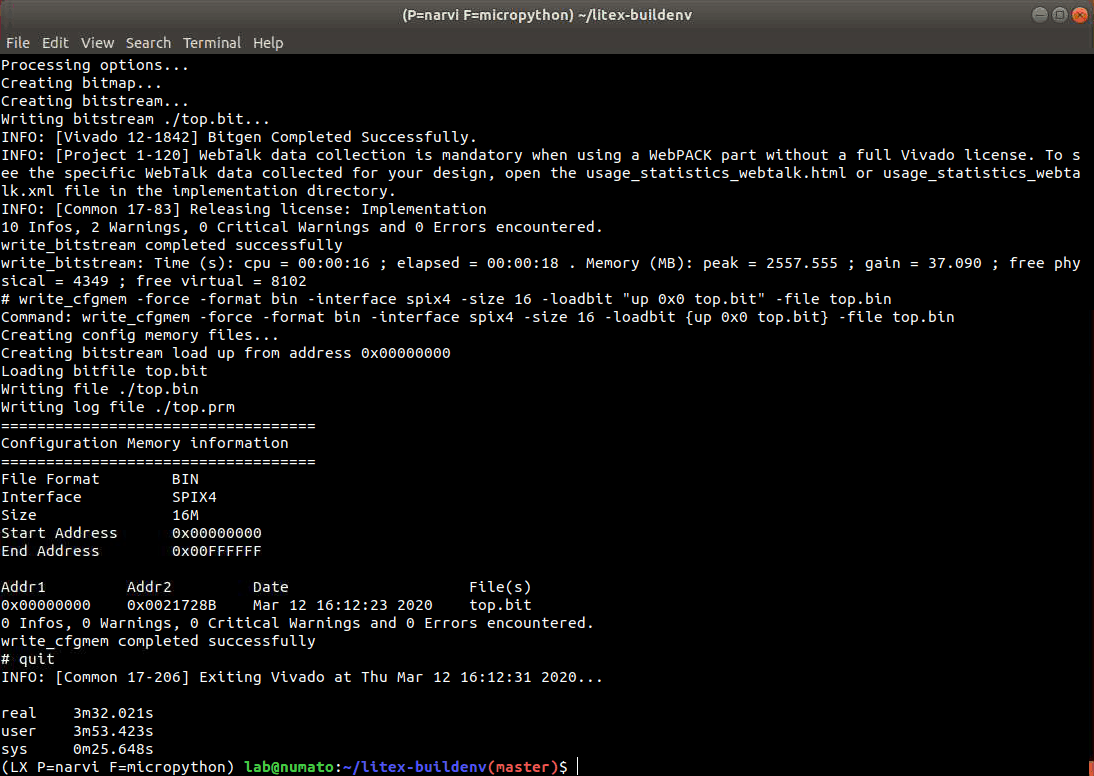 Step 5: Loading the Gateware and MicroPython onto the Narvi

Gateware and Firmware are built in the previous steps, now we can move forward with loading them onto the Narvi Spartan 7 FPGA Module. Power up Narvi by an external DC power supply and connect it to the Linux system through a USB A to Micro USB cable. We will open a new terminal by clicking “File->New Window” to run the Firmware. In the New terminal, enter the development environment by repeating step 2, and load the firmware by executing the command: 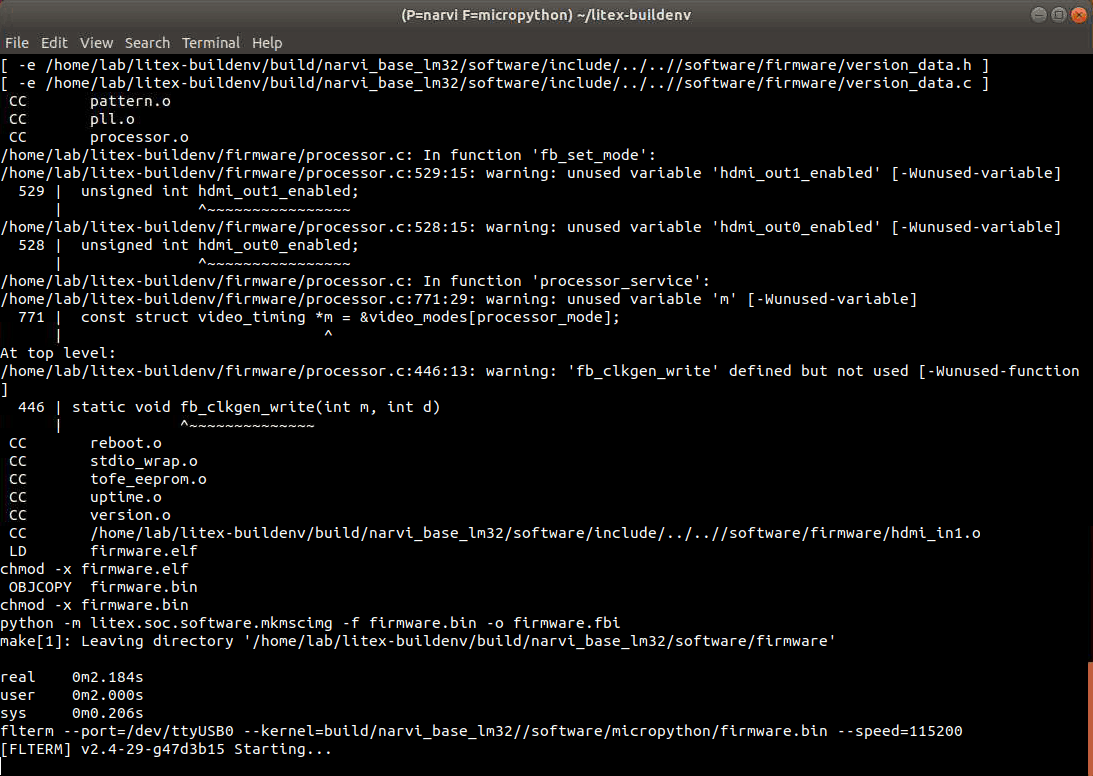 We can see the FLTERM tool “Starting” that connects with Narvi using /dev/ttyUSB. Load the gateware by executing the following command in the older terminal window.

The Done LED present on the Narvi FPGA Module should glow, indicating loading of the gateware onto the board when the above command is executed. 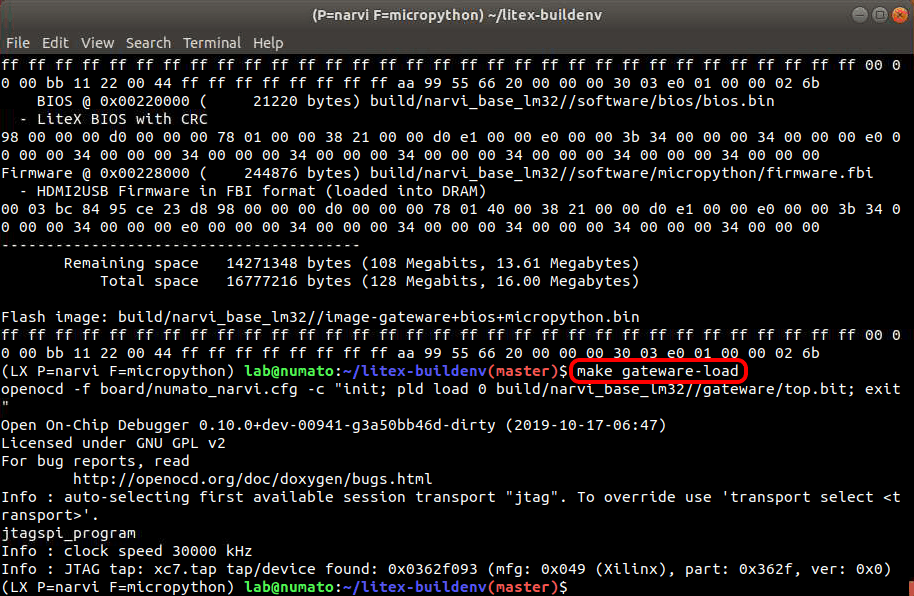 Once the gateware is loaded, Zephyr RTOS firmware starts loading onto the soft CPU. We can observe this in the new terminal window we had opened at the beginning of this step. 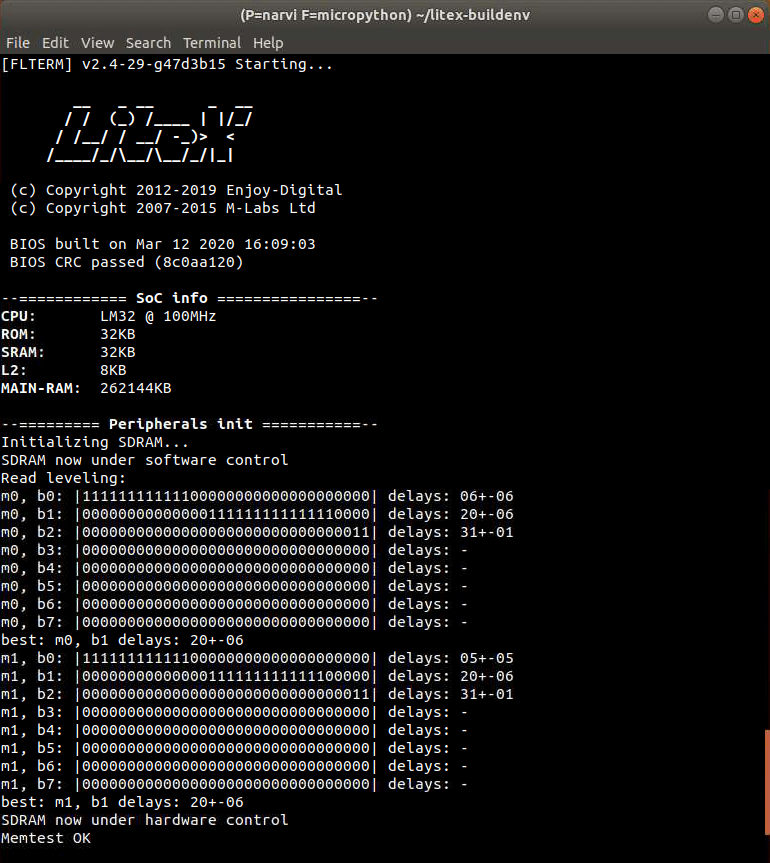 MicroPython starts booting as soon as the firmware finishes loading, and we will get a MicroPython console similar to the below image.

What are we waiting for? let us execute the classic “Hello World” and a “Simple Addition” program in the MicroPython console. 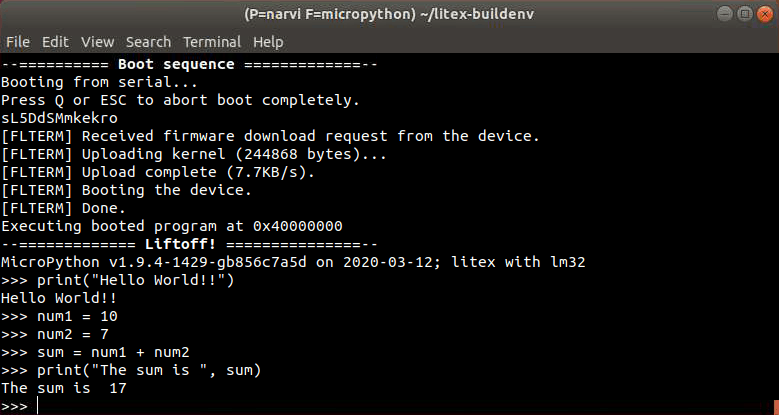 Finally, we are successful in running MicroPython on Narvi Spartan 7 FPGA Module.