Numato Lab’s GPIO modules implement an easy to use human readable set of commands. The greatest advantage of this command set is that the commands and the command behavior are same irrespective of the interface being used. So learning a single set of commands will help a user work with USB, Ethernet, WiFi or any interface for that matter. Of course, there are interface specific commands but all primary commands are exactly same. The primary command set can be divided in to two groups. The commands that works with individual GPIO, and the commands that can work with multiple GPIOs. The singular commands such as gpio set or gpio clear are very intuitive and fun to use but they tend to get inefficient as the number of GPIOs that needs to be managed goes up. For example,  to turn ON 64 GPIOs using gpio set command, a user will end up having to send 64 individual commands. This certainly is difficult if the user is manually entering the commands, and neither is this very efficient for even a script or application. readall/writell commands can be a huge time saver in such situations. readall/writell commands can accept data for multiple GPIOs and apply them all in a single command execution cycle. These commands are considered to be advanced commands and are a bit complex to understand and use. This article attempts to break it down and make it easily understandable with the help of examples.

* Some exclusions may apply. Please see the product specification/user manual for commands and features supported by individual products.

Some introductory knowledge on how GPIO modules work and how to send commands to the modules can be very helpful. Basic knowledge on number systems (primarily Hexadecimal and Binary) and conversion between them is strongly recommended.

There are four commands available on GPIO devices that are related to and including readall/writeall. They are

The following sections will discuss their usage in detail.

readall, writeall and iodir commands are designed to work with all IOs on a GPIO module at once. Of these commands, readall command simply reads the GPIO status and it does not affect the state of the IO in any way. But writeall and iodir are can change the state of the IOs when executed. As we know, these commands are designed to affect all IOs at once. But what if one wants these commands to affect only a subset of all the IOs available. For example, how to change the status/direction of four GPIOs on a 32 Channel GPIO Module without affecting the rest 28 GPIOs? iomask command is the answer. iomask command offers a convenient way to select or deselect any subset of IOs to precisely control which IOs are affected by writeall/iodir commands . The selected/deselected IOs doesn’t have to be contiguous or in any particular order.

iomask command is a sub-command to the gpio command and is issued to the device as below.

Let’s take a look at an example. Assume we need to select GPIO0, GPIO6 and GPIO7 on a 32 Channel USB GPIO Module. Let’s write down the corresponding mask value in binary and convert to hexadecimal. The first column of the table below shows the mask in binary format. Note the bits 0, 6 and 7 where the value is 1 and the rest of the bits are zeros. This means the GPIOs 0, 6 and 7 will be affected by subsequent writeall and iodir commands and the rest of the IOs will not be affected at all.

When the binary data above converted to hexadecimal notation, we get the value 000000C1. Please note that the argument must contain the exact number of characters, 8 in this example. So make sure to preserve all preceding zeros. So finally the iomask can be issued to the device as shown below.

iomask command can be issued any number of times to select and deselect IOs to work with even complex IO patterns very easily and effectively. All IOs are deselected at power up so sending iomask at least one time is necessary before writeall/iodir commands can be used. readall command does not require any specific iomask to be set for operation.

All GPIOs available on GPIO devices do have specific directions associated with them. This fact is not very important when using singular IO commands such as gpio get and gpio set. This is because the device will select appropriate direction settings for each GPIO as the command is executed. For example, the GPIO will be configured as OUTPUT when gpio set/clear command is executed and configured as INPUT when gpio read command is executed. But when using readall/writeall commands, the device will not configure the GPIO direction automatically. So it is important to configure the IO direction appropriately before issuing readall/writeall commands.

Before issuing the iodir command, make sure to send an iomask command to select the IOs appropriately.

iodir command is a sub-command to the gpio command and is issued to the device as below.

Let’s take a look at an example. Assume we need to configure GPIO0, GPIO6 and GPIO7 on a 32 Channel USB GPIO Module as inputs and configure the rest of the GPIOs as outputs. Let’s write down the corresponding mask value in binary and convert to hexadecimal. The first column of the table below shows the IO direction data in binary format. Note the bits 0, 6 and 7 where the value is 1 and the rest of the bits are zeros. This means the GPIOs 0, 6 and 7 will be configured as inputs and the rest would be configured as outputs.

When the binary data above converted to hexadecimal notation, we get the value 000000C1. Please note that the argument must contain the exact number of characters, 8 in this example. So make sure to preserve all preceding zeros. So finally the iodir command can be issued to the device as shown below. 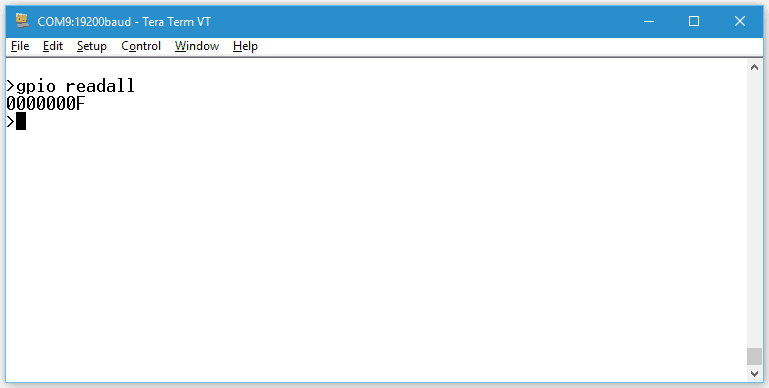 As we can see, the response has eight characters. Considering each character represents the state of four GPIOs, we can see that the whole response can represent the states of 8 x 4 = 32 GPIOs, which is what we would expect from a 32 Channel USB GPIO Module. Now the last part of understanding the readall command is to learn how to decode the state of individual GPIOs from the response. This is accomplished by simply converting the response from the device to binary format (remember, the response will be in Hexadecimal format). The conversion can be done manually by using a scientific calculator or if you are writing a program or script you may use conversion functions provided by the specific programming language. For example, when converting the response from the 32 Channel USB GPIO Module in the picture above, we will get the result as shown below.

We can see that the higher 24 positions in the binary data are zeros and the lowest four positions are ones. This means that the GPIO 0 – 3 are in ON state and GPIOs 4 – 31 are in OFF state. In essence, a 1 at any position indicate the GPIO at that position is in ON state and 0 at any position indicates that the GPIO at that position is in OFF state. Please note that the readall command does not return what was previously written using writeall command, rather it returns the digital state corresponding to the voltages applied to the GPIOs externally.

Let’s take a look at a practical scenario. Suppose we want to turn ON the four GPIOs at the highest positions on a 32 Channel USB GPIO Module. The GPIO state data for this would look like below in binary format.

As we learned with readall command, a 1 at any bit position will turn ON a GPIO at that position and 0 at any bit position will turn OFF the GPIO at that position. When this binary data is converted to hexadecimal the result would be f0000000 and this is the value we will be sending to the device as the argument to writeall command. So the complete command to be sent to the device to turn ON the upper four GPIOs would be as follows.

readall and writeall commands offer very powerful and flexible mechanism to work with large number of GPIOs. While these commands may be slightly more difficult to understand and implement, they will help save a lot of time and effort eventually.