The following steps will walk you through the process of creating the dual-HDMI output project using Xilinx ISE Design Suite.

Open Xilinx ISE Design Suite and select “New Project” from “File” menu. The “New Project Wizard” configuration window will open. Select a convenient project location and enter a name for the project. In this article, the author is used “galatea-hdmi-out” as the project name. Click “Next” to proceed. 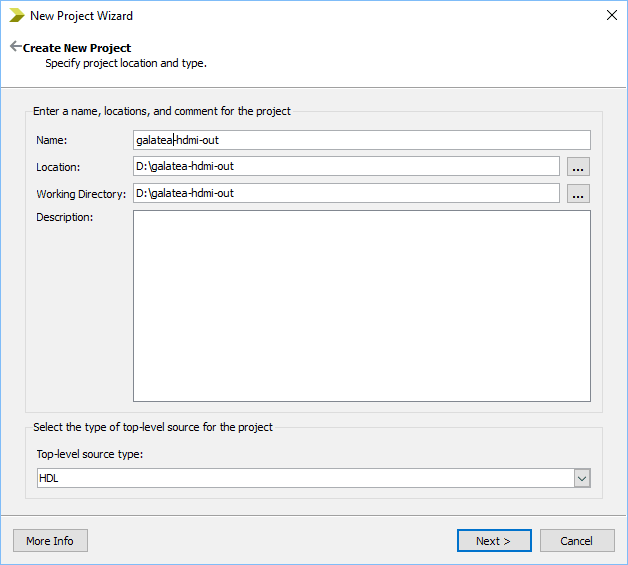 Specify the device and project settings (Family: Spartan 6, Device: XC6SLX45T, Package: FGG484 and Speed: -3) in the “Project Settings” tab as shown below. Click “Next” and “Finish” to create a new ISE project with the selected settings. 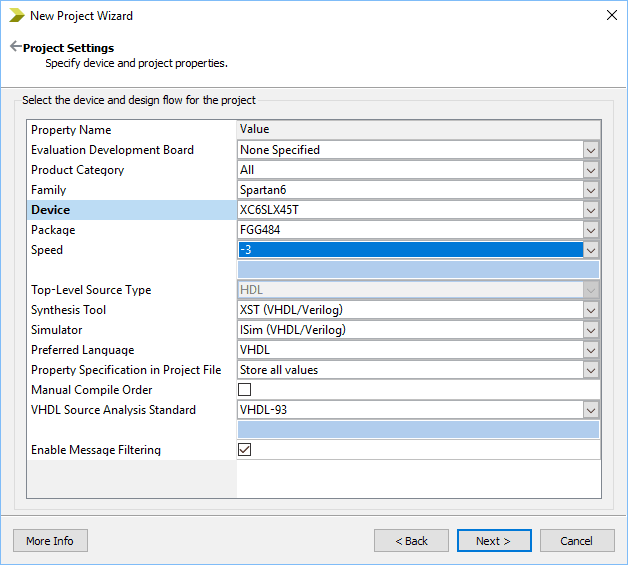 The HDMI interface has three pairs of differential data signals (One pair for each color i.e Red, Green and Blue) and one pair of differential clock signals. The signals are:

First, VGA signals are generated inside vga module. Then the VGA signals are encoded to 10-bits per channel and the data is then serialized to 10x of pixel clock rate. Finally, the three channels along with pixel clock are driven out using TMDS differential drivers.

clocking: This module is used to generate the required clocks for VGA and DVI-D. It takes 100MHz system clock from the onboard oscillator of Galatea as input and derives other DVI-D and VGA clocks from it. The project uses the following clocks

dvid: Clock signals generated from the clocking module and the VGA signals from vga module are given as input to this module and the DVI-D TMDS signals are generated as the output. It uses TMDS_encoder module to generate TMDS signals. TMDS uses 8b/10b encoding in which the 8-bit color data (red, green & blue) generated in VGA module and is converted to 10 bits. Then this data is serialized using ODDR2 (Double Data Rate primitive). The 10-bit TMDS data is generated at 25 MHz. ODDR2 uses 5 times the frequency of pixel clock (i.e. 125MHz) to serialize the 10-bit encoded data. Note that ODDR2 serializes 2-bits in 1 clock cycle of 125MHz clock. This serialized data is converted into differential signals in the top module (dvid_test) using OBUFDS drivers.

Create a constraint file and copy paste the following constraints.

Go to “Design” tab and double-click “Generate Programming File” to generate the bitstream.

Once the bitstream is generated successfully, connect the Galatea IP4776CZ38 HDMI expansion module to header P4 of Galatea PCI Express Spartan 6 FPGA Development Board and connect two HDMI cables from HDMI expansion module to the two HDMI-capable monitors. Power up the Galatea board and program the generated bit file. Once the bitstream is programmed, both the monitors should display a color pattern at 640×480@60Hz resolution as shown below. 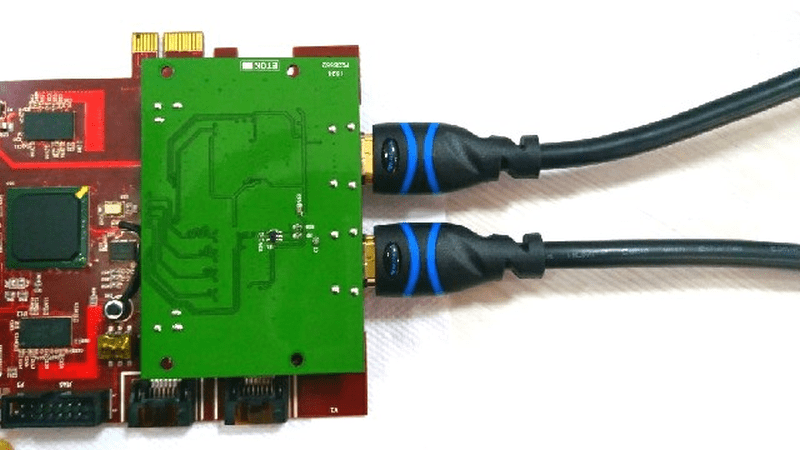 That’s it! Congratulations if you got the design working. There are a number of avenues for improvement and experimenting such as trying resolutions, patterns, framebuffer etc. You are encouraged to go ahead and try those.