CPLD vs FPGA: Differences between them and which one to use?

CPLD or FPGA and Which one to use? This is a common question that comes up very frequently especially among students and beginners. This article attempts to uncover some details of how they are different from each other and shed some light on the subject of which one to use. We will look at the advantages and disadvantages of each and discuss some situations where when one is suitable over the other.

Let’s discuss a few features from the above image: 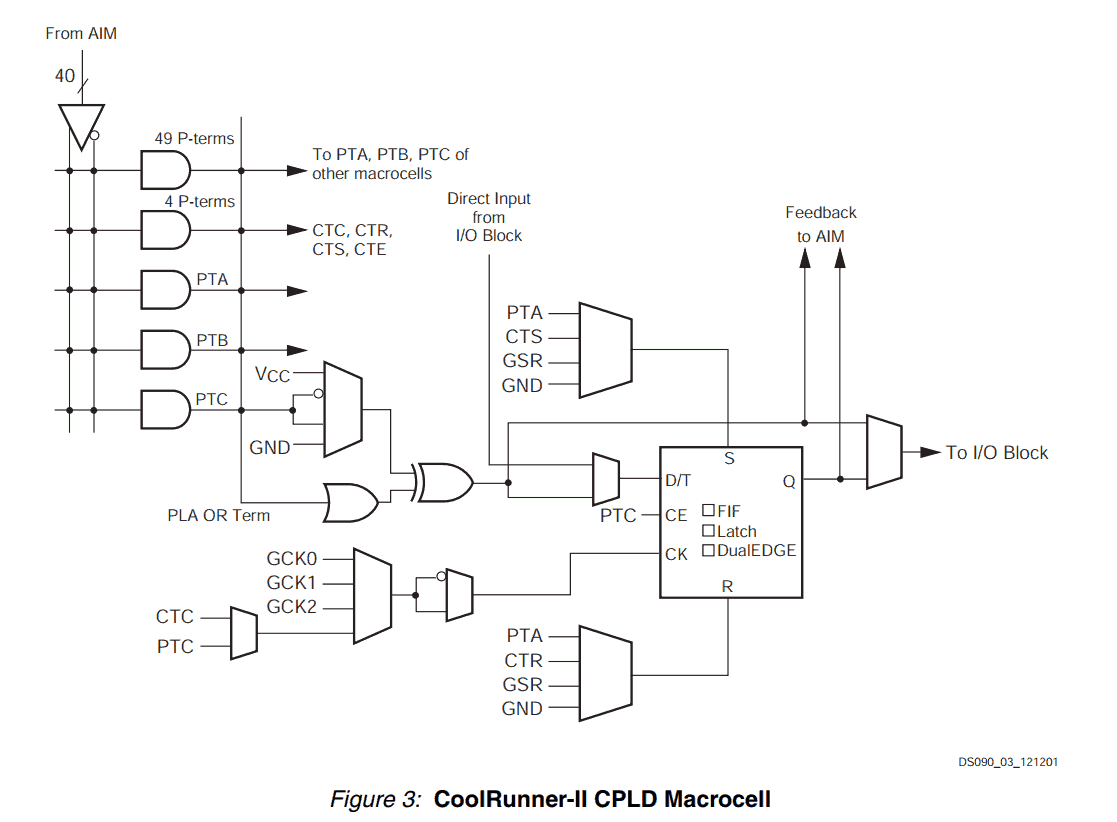 Same as in PLAs, CPLDs’ logic function in each Macrocell are electrically programmed via In System Programming (ISP) Interface over JTAG (check Figure 1). After programming, these flash-based connections remain persistent for years. This gives CPLDs a unique advantage of “instant-on” working. That is, CPLDs start working as soon as powered up since their circuitry is flashed/burned into them via ISP. That is not the case with FPGAs as we will see later.

Generalizing, we can say that, in CPLDs, there are a few hundred function blocks (or logic blocks), typically less than a thousand in number, which are accessible by a single big interconnect.

While the exact FPGA architecture is not publicly released by manufacturers, we can still get higher level architecture, which will help in understanding FPGAs and its working. A high-level example from Xilinx’s documentation is below. In the case of FPGAs, there are many Configurable Logic Blocks (CLBs) embedded in an ocean of programmable interconnects. These CLBs are incredibly complex compared to Macrocells of CPLDs and can implement vastly more complex logic functions. They are primarily made of Look-Up Tables (LUTs), Multiplexers and Flip-Flops. For the brave, Xilinx published a lot of details in Xilinx User Guide on 7 Series FPGAs Configurable Logic Block. FPGAs can contain even millions of CLBs in a single device! And millions of Flip-Flops (~3.456 million Flip Flops in Xilinx VU13P)! Compare that with just 512 Flip-Flops in the biggest CPLD from Xilinx! In short, FPGAs are massive! (not all but many are) As illustrated above, FPGAs also have dedicated hardware for various functions such as RAM, High-Speed Serial Transceivers, Digital Signal Processing (DSP) Blocks, External Memory Controllers, PLLs and MMCMs, PCIe, etc! In terms of variety of choices and flexibility, CPLDs are no match for FPGAs.

As mentioned before, FPGAs are LUT based. When an FPGA is powered up, the device is always blank. A special circuit called Configuration Circuit is present which reads the configuration data from an external ROM, and configures the LUTs as per user’s design present in the external ROM. It takes some time for FPGA to get configured and the FPGA will start functioning only after configuration loading is complete. There certainly are exceptions to this. Some manufacturers have come up with FPGAs that have built-in configuration flash. Even in this case,  the configuration data is not embedded in the fabric and some amount of configuration/setup time still apply.

Where to use CPLD or FPGA

When a design requires simple glue-logic or similar functionality which doesn’t need to be changed much, or when you need an instant-on circuit, then go for CPLDs. Otherwise, for most other applications FPGAs are generally preferred. Sometimes you can find both CPLD + FPGA in a design. In those designs, CPLDs generally do simple glue-logic as mentioned before, and are responsible for “booting” the FPGA as well as controlling reset and boot sequence of a complete board. So, depending on the application you might need to use both in a particular design.

So, there you go! We hope that you are now more enlightened about CPLDs vs FPGAs and can make an informed decision on which one to use depending on your application needs. The module form-factor boards such as the Narvi Spartan 7 FPGA Module make it easier to implement the applications without requiring end-product designers to take care of complex details such as FPGA power supplies, DDR3 routing, etc. Feel free to browse our wide range of FPGA Boards to prototype and develop your applications.